This note is a summary description of the set of scholars and literati who taught at Gresham College from its inception in 1559 to the eve of the Industrial Revolution (1800).

In the beginning, the College was to be staffed with seven professors in subjects chosen by Thomas Gresham, the founder. Gresham wanted to focus on areas of study relevant to the city (Charters and Vermont 1997). These subjects included Astronomy, Geometry, Music and Physic, in addition to the more classical Divinity, Law, and Rhetoric. It is thanks to these new chairs that Gresham College differed from the universities of Oxford and Cambridge when it was created. After the death of Gresham in 1579, the control of his endowment and of the College was left to the “City of London Corporation”, i.e. the city authorities, and theWorshipful Company of Mercers, a trade guild. It was two decades before the first lecture was offered, in 1597. Even if the College was never a success as a teaching institution, is played a significant role in promoting the innovations of the Scientific Revolution, and was a precursor to the Royal Society of London.

We used two main sources in this research. The first and most important is a book entitled "The lives of the professors of Gresham College" written by John Ward (1740), a professor of rhetoric at Gresham College. This book contains a brief biography of each professor who worked at the college according to the chair they taught. The second source is an archived webpage from the College (2004) containing an updated list of the teachers described in the first source amended by the Mercers’ archivist. The list was circulated for information, but not guaranteed to be free of errors or omissions.

Table 1 shows some descriptive statistics. There are 99 scholars and literati. The year of birth is known for 81.8% of them. The mean age at nomination is 35.1 years, fluctuating a slightly over time. Longevity (mean age at death & expected age at death when 30) increases over time, in particular during the last period, which is in line with the historical life expectancy of elites (Stelter, de la Croix, and Myrskylä 2021). The birthplace is known for 61.6% of the individuals, which is quite a low number. The median distance between the place of birth and Gresham is 59 km. However, during the first period this distance is 0 km, meaning that more than half of the scholars came from the city during this period. Finally, 54.5% of the scholars have a Wikipedia page (in some language), and 50.5% of them have left a footprint in the catalogues of the libraries of the world, Worldcat, either by having published some work, or by having been the subject of published books and articles. It is surprising that about half of the scholars in such an elite place are in fact quite obscure. 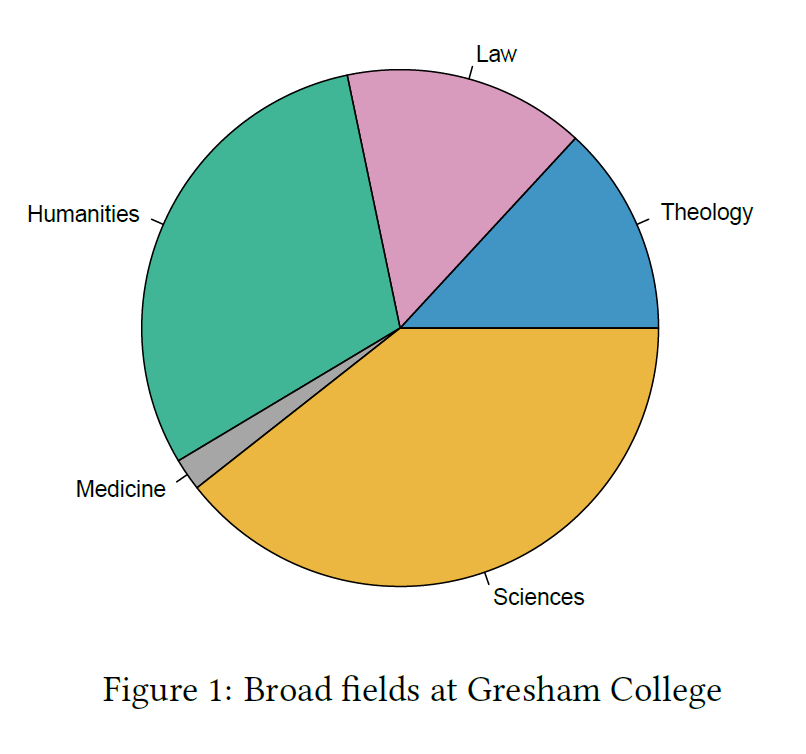 Figure 1 shows the relative importance of fields, broadly defined. Unsurprisingly, we note that the Chairs of Sciences played an important role in teaching given at Gresham College. As mentioned earlier, Astronomy was a real drawcard in the early days of the College. After the sciences, the most represented field is the humanities, including Rhetoric and Music. The last part of the chart is divided into 3 parts: 2 larger ones occupying more or less the same place (Law and Theology) and a last one occupying a marginal place (Medicine).

Figure 2 is a plot of the places of birth of all the scholars of Gresham College. Looking at this image, we can say that the scholars come exclusively from the United Kingdom. The College did not welcome any non-British Europeans. 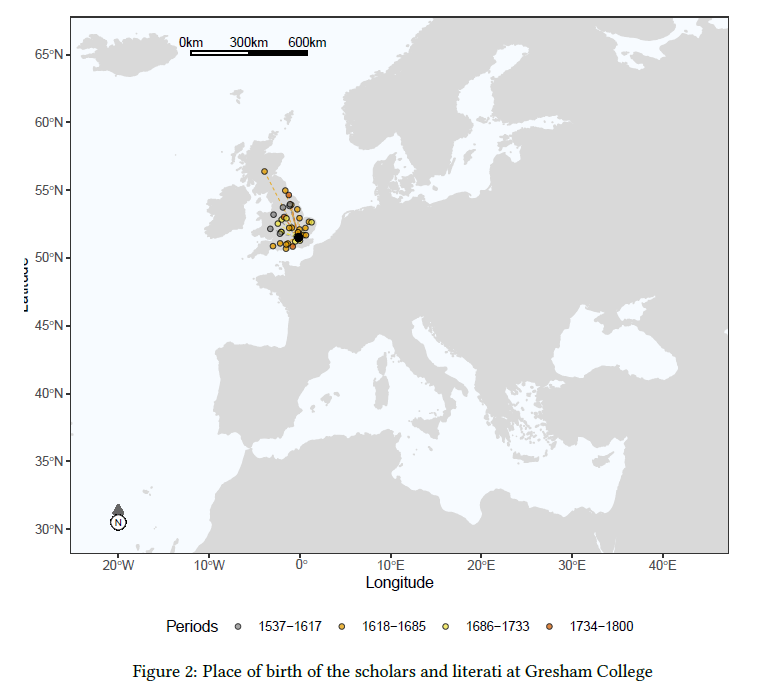 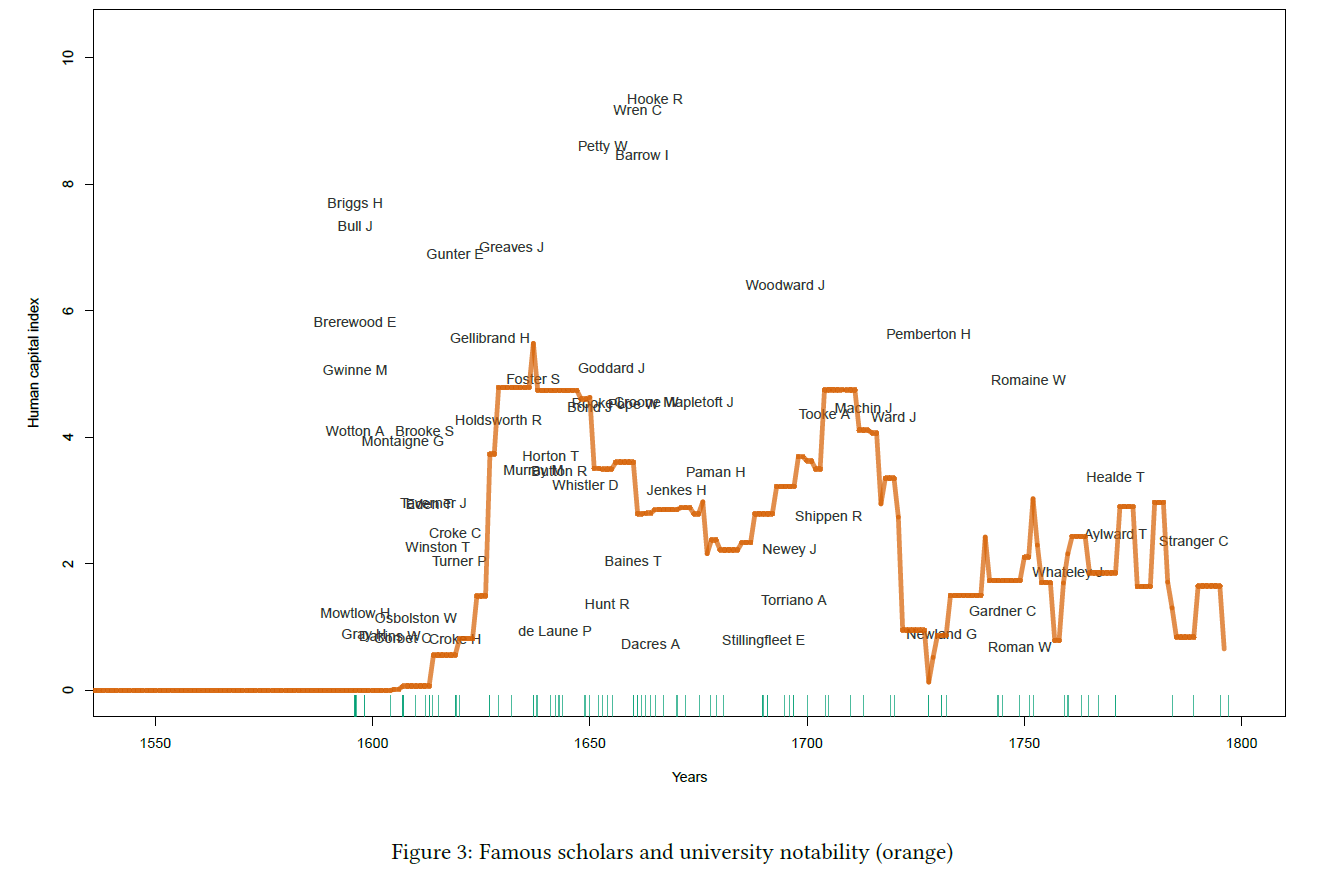 We calculate a heuristic human capital index for each individual in the database. We combine information from Worldcat and Wikipedia, and use principal component analysis. We also compute the notability of the university at each date by averaging the human capital of the scholars active at the College 25 years before that date. Details are given in Appendix. Figure 3 shows the names of all the scholars with a positive human capital index. The orange line plots the notability of the university.

The picture is one of quality, driven by top scholars. After a high initial level, the quality is slightly decreasing over time, until 1750. The college has a strong human capital index, particularly during the seventeenth century. The teachers who are described in the next section, “Top 5 professors”, are those who have the highest human capital index, and they are nearly all from that period.

A brief overview of the five professors with the highest human capital index follows. They are all key figures of the Scientific Revolution (Applebaum 2003).

Robert Hooke (Freshwater 1635 – London 1703) has a large number of discoveries in the fields of physics, mechanics, watchmaking, optics, biology, paleontology, geology, astronomy, telephony, meteorology and architecture. He is therefore considered to be one of the greatest experimental scientists of the 17th century. He is also one of the key figures of the Scientific Revolution of the modern era. Robert Hooke taught at Gresham College from 1665 to 1703 and was a fellow of the Royal Society (1660-1703).

Christopher Wren (East Knoyle 1632 – Hampton Court 1723) was a British scientist and architect known especially for his contribution to the reconstruction of London after the Great Fire of 1666. He supervised the design of St. Paul’s Cathedral, one of the few cathedrals built in England after the medieval period. After Gresham College he taught at the University of Oxford, and was a fellow of the Royal Society as well.

William Petty (Romsey 1623 – London 1687) was at first a precursor of economic policy research. In particular, he is at the origin of the foundations of political economy and demography. He was the first to propose the use of statistics in these fields. His deep contributions to these fields are quite different from the subjects he taught: music at Gresham College and anatomy at the University of Oxford. He became fellow of the Royal College of Physicians and was a founding member of the Royal Society.

Isaac Barrow (London 1630 – London 1667) was a professor of geometry at Gresham College. A member of the Royal Society, he is also one of the precursors of innitesimal calculus. In particular, he worked on tangents. Isaac Newton was one of his students. Barrow resigned from Cambridge to create a vacancy for Newton, because he recognized that Newton had superior abilities to his own. He devoted the rest of his life to theology.

Henry Briggs (Warley Wood 1561 – Oxford 1630) was also a professor of geometry at Gresham College. He was one of the people who contributed to the development of logarithms. We owe him the first table of decimal logarithms described in his great work, "Arithmetica Logarithmica" of 1624. Briggs also had affiliations with Oxford and Cambridge, and moved back to Oxford when the opportunity presented. 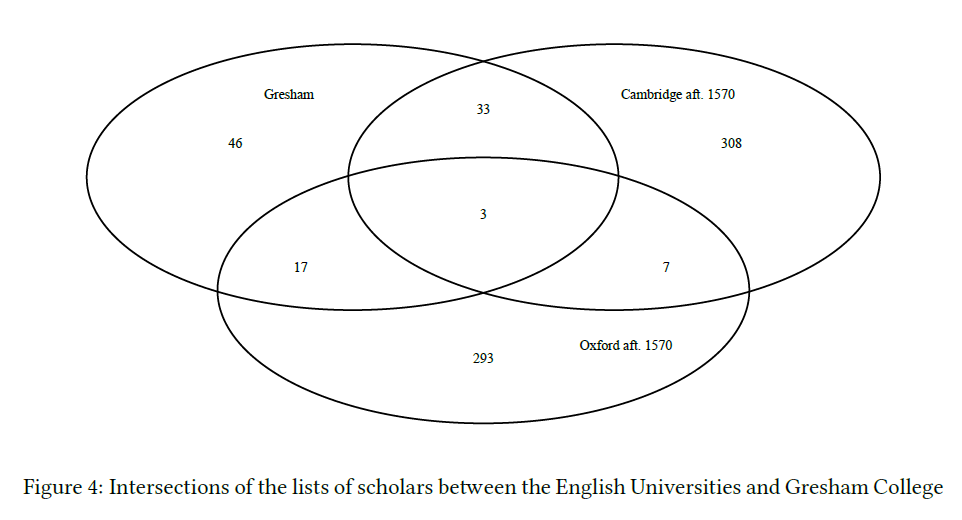 8 Intersections with nearby Universities

The Venn diagram in Figure 4 shows that, among the 99 scholars at Gresham College, 46 were not involved in teaching at Oxford or Cambridge. 33 were either fellow or professor at Cambridge, 17 at Oxford, and 3 at both. Thus Gresham College was very tightly related and dependent on its two larger neighbors. Note that, in Figure 4, the numbers for Oxford and Cambridge are still preliminary.

This institution is often represented by a grasshopper because its founder’s will was signed and sealed with Gresham’s grasshopper-shaped stamp four years before the great merchant died in 1579.

During the eighteenth century, there was a controversy about the quality of the lectures given at Gresham College. There was a petition claiming that lecturers taught “in such an indifferent manner when they did, as if the Professors desired to have no company to attend them but be wholly exempt as they formerly had been from taking any pains at all.” (Charters and Vermont 1997).

Ward, John. 1740. The lives of the professors of Gresham College: to which is prefixed the life of the founder, Sir Thomas Gresham. With an appendix,... By Iohn Ward,... John Moore.