This note is a summary description of the set of scholars and literati who taught at the University of Macerata from its inception in 1540 to the eve of the Industrial Revolution (1800).

The University of Macerata, located in the hilltop town of Macerata in the Italian Marches region, was established in 1540 with a bull issued by Pope Paul III, although the first attempt at founding a university in Macerata dates as far back as 1290. In his book The Universities of the Italian Renaissance, Paul Grendler (2002) provides a detailed summary of its history. Macerata became the fourth university of the Papal State after Bologna, Rome, and Perugia, and looked closely at the example of Bologna for its statute and organization. It started as a rather small institution; however with time, both the pool of students and the faculty increased significantly, thereby making Macerata a vibrant intellectual center in the Marches.

The book I docenti dell’antica Università di Macerata (1540-1824) by Sandro Serangeli (2010) is a comprehensive biographic collection of the professors emeriti and intellectuals that became part of the faculty of Macerata from its foundation to the beginning of the 19th century. The book is structured in two parts: the first compiles the lectores by order of first appointment, while the second sorts them in alphabetical order.

Table 1 shows some descriptive statistics. There are 713 scholars and literati. The year of birth is known for 12.2 of them, while, on the contrary, the birth place is known for 95.2% of the individuals. This is a typical situation often found in Italian institutions: birth years were not recorded on matricula or payrolls, but the origin of the professors were. This means that what can be said about ages at appointment and death is based on a small number of observations, while geographical patterns based on places of birth are very reliable. The mean age at appointment is 32.6 years, with an astonishing average of 24.7 years for the period 1686-1733. Our two measures of longevity, mean age at death and expected age at death when 30, indicate rising longevity over time. The median distance between birth and Macerata is 0km, meaning that more than half of the scholars came from the city. There is more variety in origin for the first two periods though. Finally, 2.5% of the scholars have a Wikipedia page (in some language), and 10.1% of them have left a footprint in the catalogues of the libraries of the world, Worldcat, either by having published some work, or by having been the subject of published books and articles. Those two numbers are quite low compared to other universities, but we will see that the University of Macerata has several characteristics which make it weak in terms of publications: a majority of scholars in law and a lack of renowned professors to attract talents.

Figure 1 shows the relative importance of fields, broadly defined. The university started as a rather small institution, whose faculty was composed of only nine or ten professors for more than forty years after its foundation. The majority of them taught civil law. With time, the faculty became more diversified, with lecturers appointed specifically to teach humanities, technology, medicine, and theology. However, the most well-known scholars remained the legists. Occasional visits from reputable intellectuals further boosted the reputation of the athenaeum Grendler (2002). 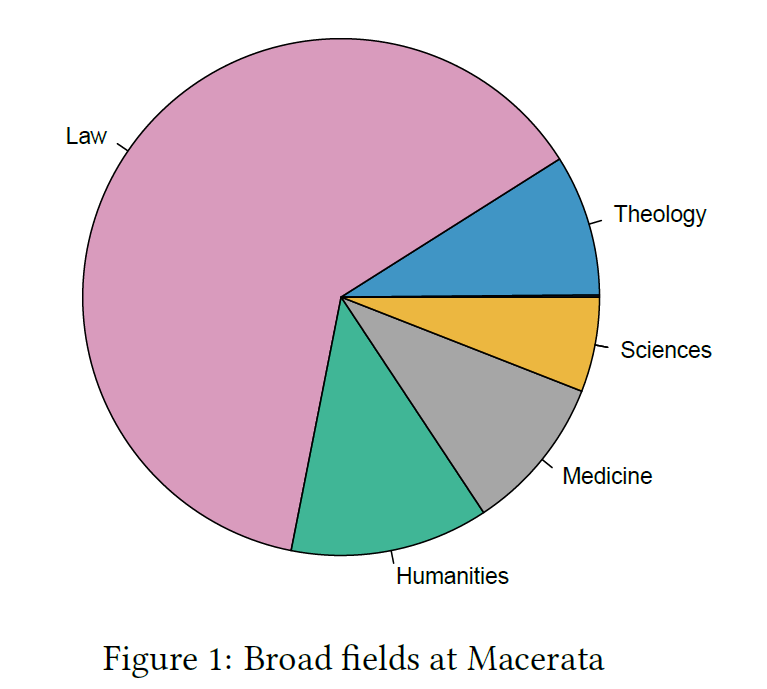 Figure 2 is a plot of the places of birth of all the scholars at Macerata. Northern Italy is dominant. The number of scholars coming from elsewhere is negligible. 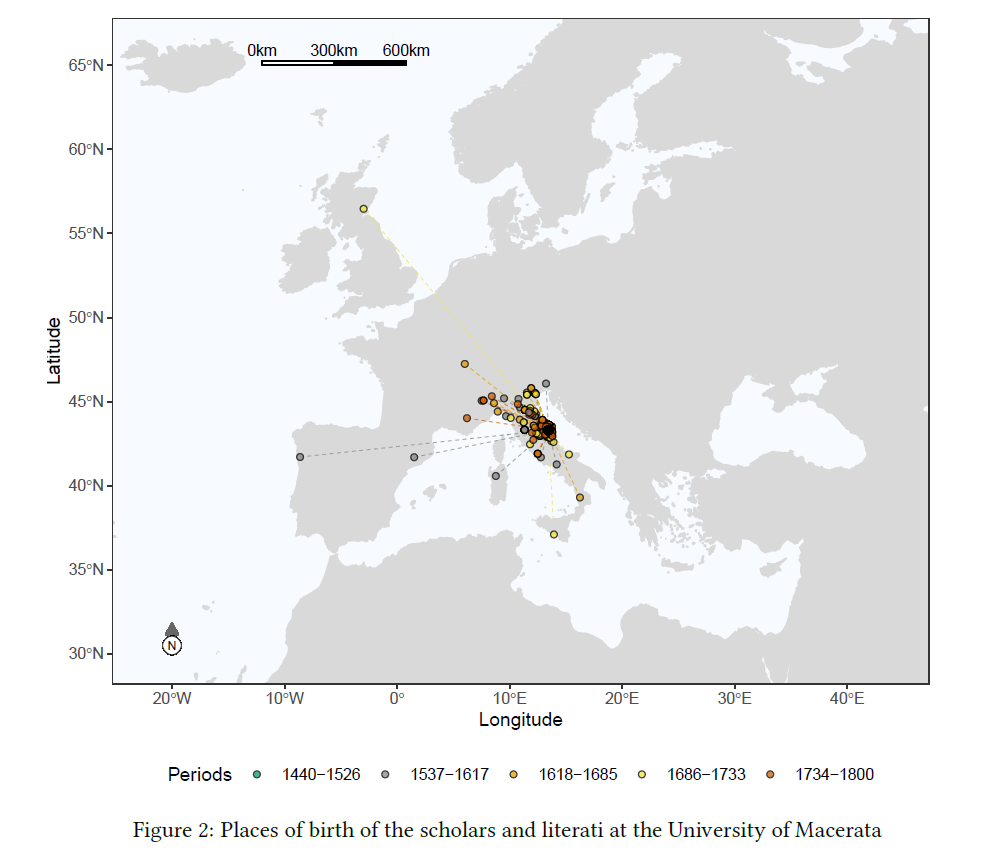 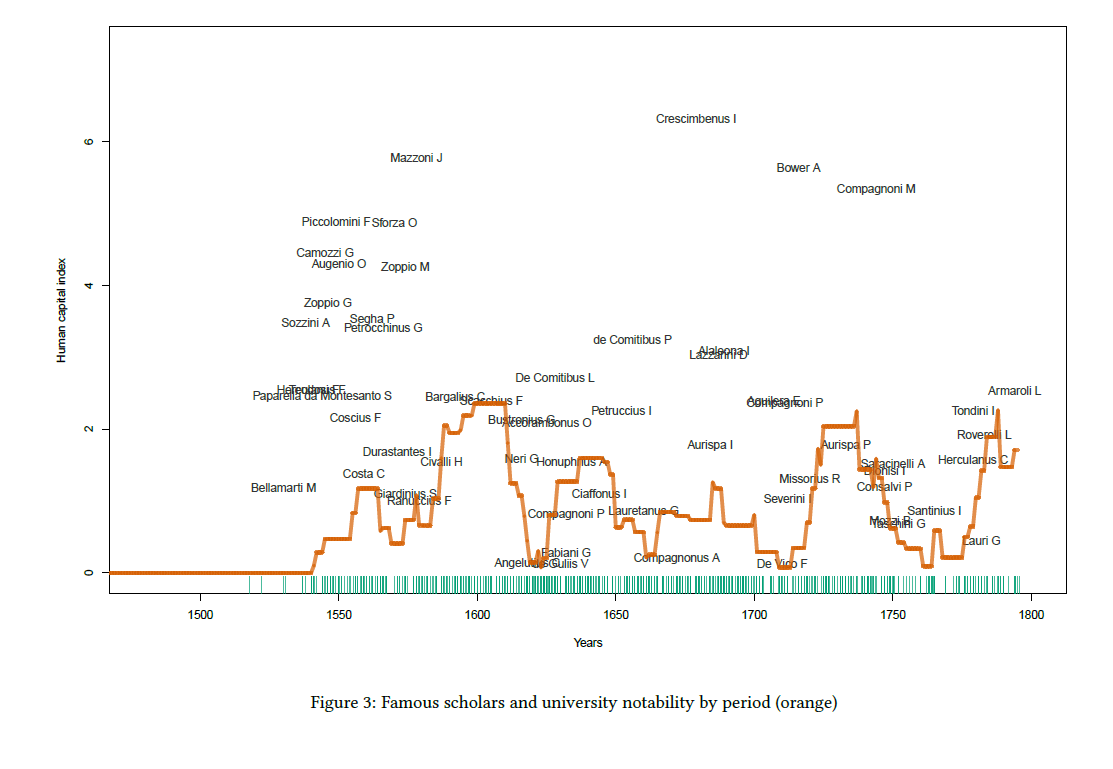 For each person in the databasewe compute a heuristic human capital index, identified by combining information from Worldcat and Wikipedia using a principal component analysis. We also compute the notability of the university at each date by averaging the human capital of the scholars active in Macerata 25 years before that date. Details are given in Appendix. Figure 3 shows the names of all the scholars with a positive human capital index. The orange line plots the notability of the university.

The pattern is one of a weak university. Despite the very large number of individuals found in Serangeli (2010), represented by the vertical green lines, Figure 3 is rather empty. Moreover, when comparing this graph with that of other universities, notice that the scale of the vertical axis may not be the same. Here, the range is (0,6), while for top universities, we have a scale of (0,14) to accommodate several scholars with an index between 6 and 14. Hence in Macerata, there are a few known people, in particular at the beginning of the university, and a mass of obscure professors who left little or no publications at all.

Ioannes Maria Crescimbenus (Macerata 1663 – Rome 1728) was appointed as a professor at Macerata in 1679, after he graduated at the age of only 16. He was one of the founders and custodians of the Academy of Arcadians. In addition, Crescimbenus was among the firsts to compile a history of Italian poetry, Istoria della volgar poesia, in 1698. He was canonized in 1705 and just before dying he became a member of the Society of Jesus.

Jacopo Mazzoni (Cesena 1548 – Cesena 1598) was a prominent scholar who studied humanities at the universities of Bologna and Padua. According to Serangeli (2010), his appointment as a professor in 1987 significantly boosted Macerata’s prestige. He was also partly responsible for the foundation of the Accademia della Crusca. Mazzoni declined Pope Gregory XIII’s invitation to become a prelate and chose to remain in academia. During his career, he taught at several prestigious athenaeums, including Rome and Cesena.

Archibald Bower (Dundee 1686 – London 1766) was a controversial Scottish historian who taught at Macerata in 1725, while also being a consultant for the Tribunal of the Holy Office of the Inquisition. He was an instructor at various other Italian institutions, such as Florence and Perugia. After withdrawing from the Society of Jesus to conform to the Church of England, he later reconciled with the Catholic Church in 1744. His most notable works are History of Rome and History of the Popes.

Mario Compagnoni (Macerata 1714 – Rome 1780) was a nobleman who became a lecturer at Macerata after studying there and in Rome. He was also a member of the Academy of Arcadians: he held important ecclesiastical positions, and was finally appointed Cardinal in pectore by Pope Clement XIV and assigned the titular church of Sant Agostino in 1770. Serangeli (2010) reports that thanks to his involvement, the Jesuits’ properties in Macerata were donated to the University rather than to the Barnabites.

Sforza degli Oddi (Perugia 1540 – Parma 1611) was a prominent playwright and jurist. He was first appointed at Macerata as a law professor in 1583. He also taught at Pisa, Pavia, Perugia, and Padua. His most notable works were legal; however he also wrote several plays, including L’erofilomachia, ouero, Il dvello d’amore, et d’amicitia: comedia nvova and Prigione d’amore : commedia nvova.

Ioannes Bernardinus Ciaffonus was an ecclesiastic belonging to the Order of Friars Minor Conventual who studied at the College of San Bonaventura in Rome. He was the rector of important teaching institutions of his religious order. His work Apologia in favore de’SS. Padri, contra quei che nelle materie morali fanno de’ medesimi poca stima. Opera postuma..., molto necessaria per un’infallibile regolamento delle coscienze confuse frà le ambiguità de’ moderni probabilistici, about the debate between the probabilistic and rigoristic doctrines, was eventually considered as an offense to Jesuits by the Papal State and banned in 1701.

We assume that when a professor occupied a position at more than one university in their life, this established a link between those universities. The universities with which Macerata is linked are displayed in Figure 4. They mainly consist of universities located in Northern Italy, with the exception of Rome, Palermo, and Avignon, in France.

Macerata awarded an impressively large number of theology doctorates, despite the fact that the university never had more than one theologian. Grendler (2002) reports that perhaps this happened because several mendicant orders such as the Dominicans and Franciscans had houses of study at the university.