Scholars and Literati at the "Mersenne" Academy

This note is a summary description of the set of scholars and literati who participated in the “Mersenne” Academy in Paris.

In 1635, Marin Mersenne founded the Academia Parisiensis, also called the “Mersenne” Academy. The institution, though informal, prefigured the Academy of Sciences created by Colbert in 1666 (Pecker 2009). With this Academy, Mersenne’s aim was to provide a place where scholars could discuss ideas freely and passionately. It gathered many outstanding scholars around Mersenne and became the center of a network for the exchange of information (Applebaum 2003). Mersenne maintained an important correspondence with several French and foreign mathematicians and scientists. The members of the Academy included the most renowned scientific personalities of the time and not just enlightened amateurs. Initially, the Mersenne Academy was held informally at the homes of its members. Then, due to Mersenne’s difficulties travelling, meetings were held in his convent cell. Among the members of the institution, some never attended the sessions. Their participation in the Academy took place exclusively through correspondence, such as Pierre de Fermat or Christian Huygens (see below). Mersenne’s death in 1648 brought the Academy to an end. Jacques Le Pailleur took over until his death in 1654. The working of this latter academy remains little known (Goldstein and Cosandey 2005).

“La vie du R.P. Marin Mersenne théologien, philosophe et mathématicien de l’ordre des Pères minimes” was written by Hilarion de Coste in 1648, one year after Marin Mersenne’s death. Hilarion de Coste was a religious man, a member of the Order of Minims like Mersenne. He was also a writer who specialized in biographies. The part devoted to the Mersenne Academy lists the names of the different members of the institution. The use of this source is not easy for two main reasons. Firstly, Hilarion de Coste does not provide any biographical data for the cited members. Secondly, on several occasions, he only indicates the members’ surnames, which makes it difficult to identify them. Many of the correspondents cited by Hilarion de Coste seem to have been mainly honorary members of the Academy (de Coste 1648).

Table 1 shows some descriptive statistics. There are 193 scholars and literati. The year of birth is known for 64.8% of them. The mean age at which these scholars appear in the Academy is 39.8 years, which is quite old compared to the more standard academies surveyed so far. Longevity (mean age at death & expected age at death when 30) is 65–67 years. The median distance between birth and Paris is 248km, meaning that more than half of the scholars came from quite far away from Paris. This Academy was thus not just a Parisian salon. Finally, 57.5% of the scholars have a Wikipedia page (in some language), and 68.9% of them have left a footprint in the catalogues of the libraries of theworld, Worldcat, either by having published some work, or by having been the subject of published books and articles. These two figures are quite high, in particular given the high number of individuals involved over such a short span of time. 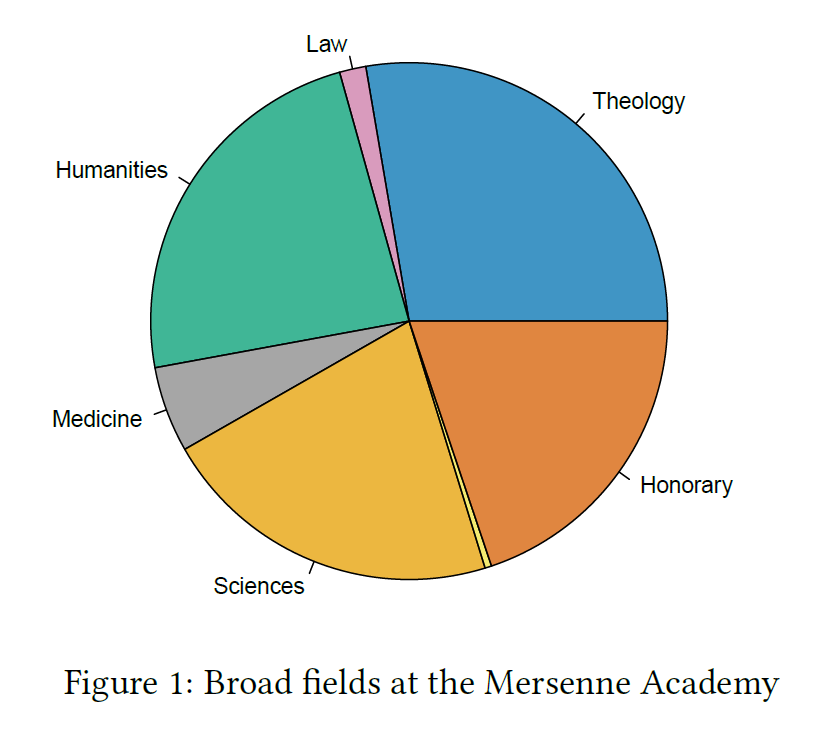 Figure 1 shows the relative importance of fields, broadly defined. The main fields at the Mersenne Academy were science, humanities, medicine, and theology. They correspond to Father Marin Mersenne’s main interests. According to Mazauric (1997), the philosophical questions addressed concerned the constitution of modern science. The distribution of fields supports Simone Mazauric’s observation that the Mersenne Academy was one of the 17th-century scientific institutions with the most clearly affirmed scientific vocation. Besides the active scholars and literati, there was about one fifth of “Honorary” members, individuals who held important positions with no clear scientific identity.

Figure 2 is a plot of the places of birth of the Mersenne Academy members. Most of them were born in France, but there was a non negligible minority from abroad, stressing the European character of the institution. 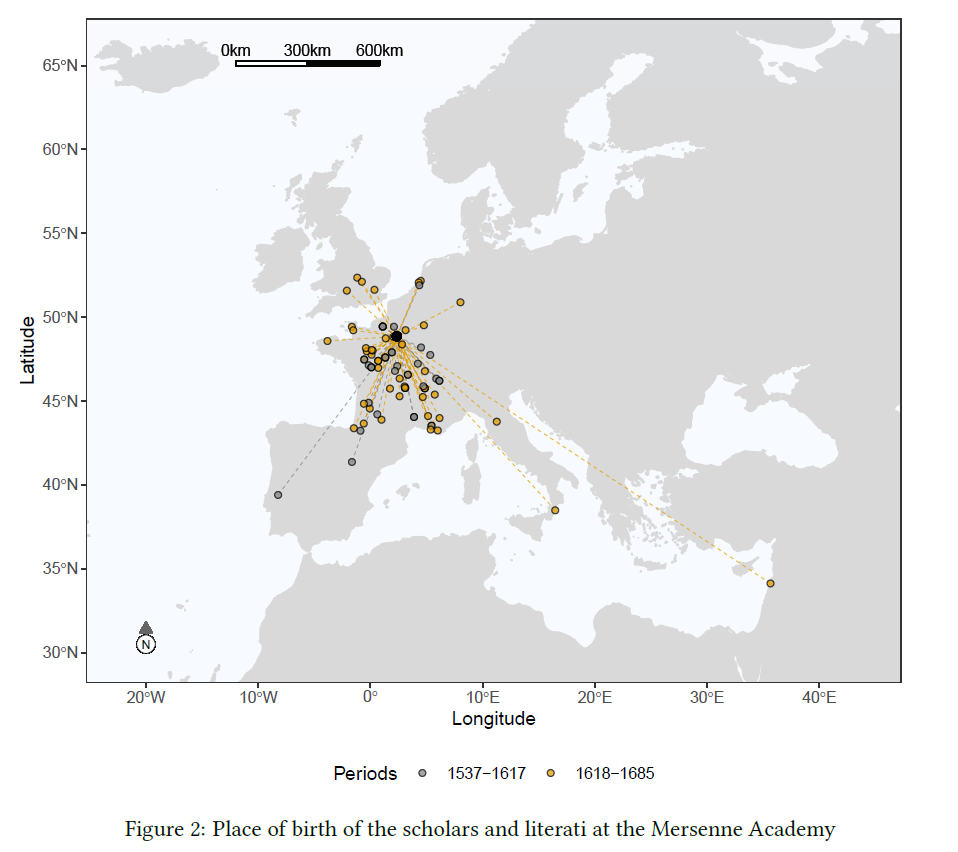 For each person in the databasewe compute a heuristic human capital index, identified by combining information from Worldcat and Wikipedia using a principal component analysis. Details are given in Appendix. Figure 3 shows the names of all the scholars with a positive human capital index. The vertical green lines (rug plot) show the distribution of all scholars, including the obscure ones, over time. The pattern is one of exceptional high quality. There were not only a few superstars, but a mass of scholars publishing very well.

We now provide a brief overview of the eight members of the Academy with the highest human capital index.

René Descartes (Descartes (formerly La Haye-en-Touraine) 1596 — Stockholm 1650) was a French mathematician, physicist, and philosopher. He is considered as one of the founders of modern philosophy. Between 1626 and 1627, he met Father Marin Mersenne in Paris and became known for his inventions in the field of mathematics. Descartes was one of Mersenne’s main correspondents. His rivalry with several of his contemporaries, such as Pierre de Fermat, on scientific issues was notably spurred on by Mersenne.

Blaise Pascal (Clermont-Ferrand 1623 – Paris 1662) was a French mathematician, physicist, inventor, philosopher, moralist, and theologian. He was notably the inventor of the first calculating machine. Yet his most important contribution in mathematics was the development of probability theory. He took an active part in the sessions of the Mersenne Academy, notably by submitting his work for peer review.

Thomas Hobbes (Westport 1588 – Hardwick Hall 1679) was an English philosopher famous for his major work, Leviathan, which has had a major influence on modern political philosophy. During an eight-month stay in Paris, which took place between 1634 and 1637, he met Father Marin Mersenne. The latter invited him to his Academy and encouraged him to publish his works on psychology and physics.

Hugo de Groot (Delft 1583 – Rostock 1645), known as Grotius and also known as Huig de Groot, was a humanist, diplomat, lawyer, theologian, and jurist. He was born in the United Provinces and studied at the University of Leiden. He was one of the most important scholars of the 16th and 17th centuries in the fields of philosophy, political theory, and law. In particular, he laid the foundations of international law. Following a religious controversy, he fled to France and stayed there from 1621 to 1644.

Tommaso Campanella (Stilo 1568 – Paris 1639), also known by the pseudonym Settimontano Squilla, was an Italian philosopher, theologian, and poet. His Christian name was Giovanni Domenico Campanella. In honour of Thomas Aquinas, he adopted the first name Tommaso at the age of 14 when he entered the Dominican Order. From 1602 to 1626, he was sentenced for heresy and imprisoned after, it seems, wanting to establish a sort of theocratic republic in his convent in Calabria. After his supervised release in 1629, following another stay in prison, he took refuge in France in 1634 and spent the rest of his life there. In particular, he enjoyed the protection of Cardinal de Richelieu.

Christian Huygens (The Hague 1629 – The Hague 1695), in Dutch Christiaan Huygens, was a Dutch mathematician, astronomer, and physicist. He was responsible for a number of breakthroughs, including the discovery of Titan, Saturn’s largest satellite, the first comprehensive description of the Solar System with six planets and six moons, and the creation of the first pendulum clock. He has also been credited with a fundamental role in the development of modern computing. During a four-month stay in Paris in 1655, he was introduced to the circles of Claude Mylon and Habert de Montmor, who were at the origin of the Académie française and the Mersenne Academy. Christian Huygens therefore does not seem to have met Marin Mersenne during his lifetime.

Pierre de Fermat (Beaumont-de-Lomagne, first decade of the 17th century – Castres 1665) was a French magistrate, polymath, and mathematician. He was nicknamed the “prince of amateurs" because he learned mathematics during his leisure time. He also distinguished himself as a poet, Latinist, and Hellenist. He was also interested in the sciences and particularly in physics, with the development of the Fermat Principle in optics. In the field of mathematics, he is known for having formulated the last Fermat theorem, which was demonstrated only 300 years later by British mathematician Andrew Wiles in 1994. In 1636, Pierre de Fermat began a correspondence with Marin Mersenne. He seems to have never travelled to Paris to meet him. However, his mathematician friends, Beaugrand, Étienne Pascal, and Roberval among others, represented him at the Mersenne Academy. On several occasions, he quarrelled with Descartes, also a member of the Academy, over mathematical matters.

Marin Mersenne (Oizé, 1588 – Paris, 1648), or Marinus Mersenius, was a French religious of the Order of Minims. He was famous as a scholar, mathematician, and philosopher. Among his contributions to science are the first laws of acoustics, which bore his name for a long time. He was also the originator, together with Galileo, of the law of falling bodies in the void. Because of his extensive correspondence with the European scholars of his time, he was nicknamed “the secretary of learned Europe." Thanks to this network of correspondence and his Academy among others, Mersenne endeavored to animate, stimulate, and impel the Scientific Revolution. 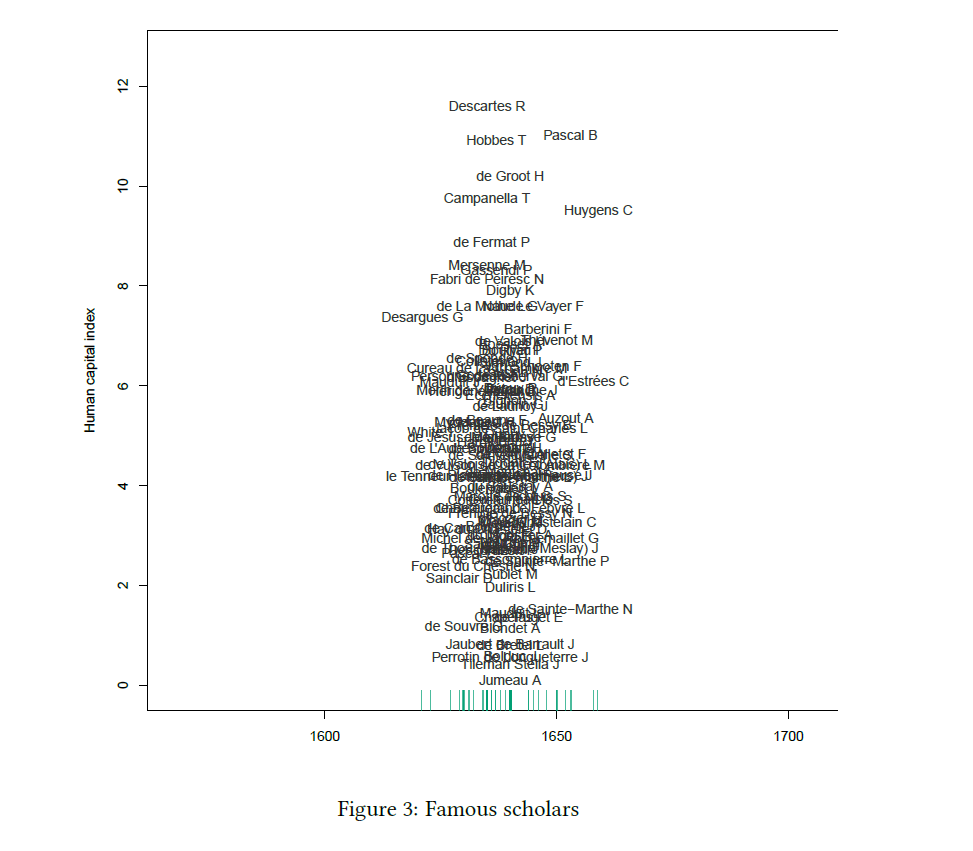 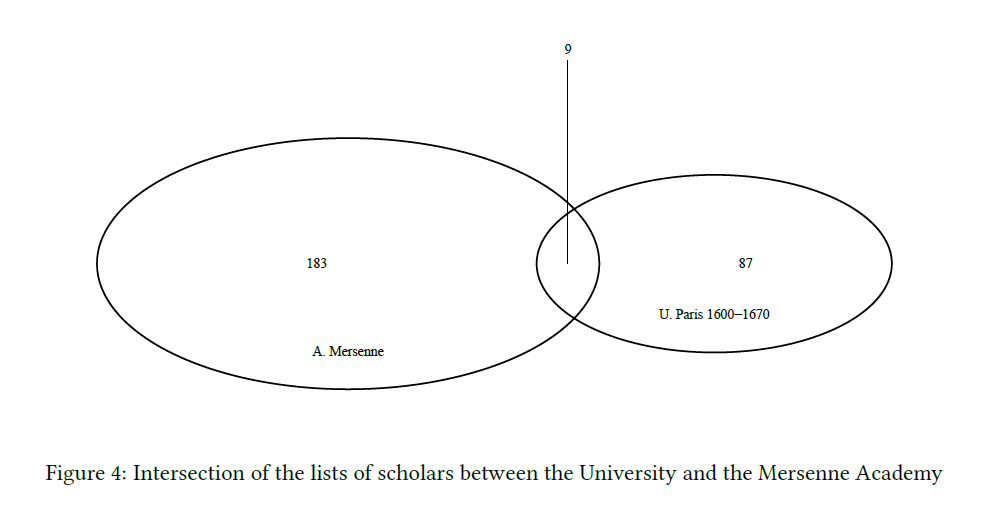 8 Intersections with the University of Paris

Figure 4 shows that several participants to the Mersenne circle were also professors at the local University (for which we have partial information so far). Hence, this academy was not totally disconnected from the local university.