This note is a summary description of the set of scholars and literati who taught at the University of Geneva from its inception in 1559 to the eve of the Industrial Revolution (1800).

Created in 1559 thanks to Jean Calvin, the University of Geneva was at first called “the Academy of Geneva." Its founder was greatly inspired by the example of the University of Lausanne. In fact, established in eastern Switzerland, this institution was originally a Protestant theological and humanist seminary aiming to train theologians. It participated to the transformation of the city of Geneva into a strict theocracy in which no individual action was beyond the scope of religious oversight (Alexander 2014). However, this changed gradually from 1581 when a secular movement developed. It was only after 1800 that the academy changed its name to the “University of Geneva," also called “UNIGE".

With its 30 portraits and numerous reproductions of documents, the book entitled “L’histoire de l’université de Genève : L’Académie de Calvin" (Borgeaud 1900) traces the life of the university between 1559 and 1798. It also contains a complete list of professors in the appendix. The writer was a Professor at the Faculties of Law and Literature. In his work, he describes the impetus given by Jean Calvin and Théodore De Bèze, the reign of theology, and the century of philosophers, detailing the many professors who taught at the university. The information provided can be completed using the biographical dictionary of Switzerland by Attinger, Godet, and Türler (1928).

Table 1 shows some descriptive statistics. There are 144 scholars and literati. The year of birth is known for 87.5% of them. The mean age at nomination is 35.6 years, fluctuating a bit over time. Longevity (mean age at death expected age at death when 30) increases over time, in particular during the last two periods, which is in line with the historical life expectancy of elites (Stelter, de la Croix, and Myrskylä 2021). The birthplace is known for 71.5% of the individuals. The median distance between birthplace and Geneva is 0km over the whole period, meaning that more than half of the scholars came from the city. There is however a sharp decline in this distance, showing that the university was originally launched with foreigners, and then relied more and more on people from Geneva. Finally, 42.4% of the scholars have a Wikipedia page (in some language), and 74.3% of them have left a footprint in the catalogues of the libraries of the world, Worldcat, either by having published some work, or by having been the subject of published books and articles.

Figure 1 shows the relative importance of fields, broadly defined. Most of the courses taught at the University of Geneva were in Rhetoric, Dialectics, Hebrew, and ancient Greek, that is to say the chair in the humanities. As can be seen on the chart in Figure 1, this type of course constitutes half of the teaching. The other half of the chart is divided into 3 distinct parts: Theology, which was Calvin’s chair, Sciences, and law which was the chair that Théodore de Bèze had introduced to the university. 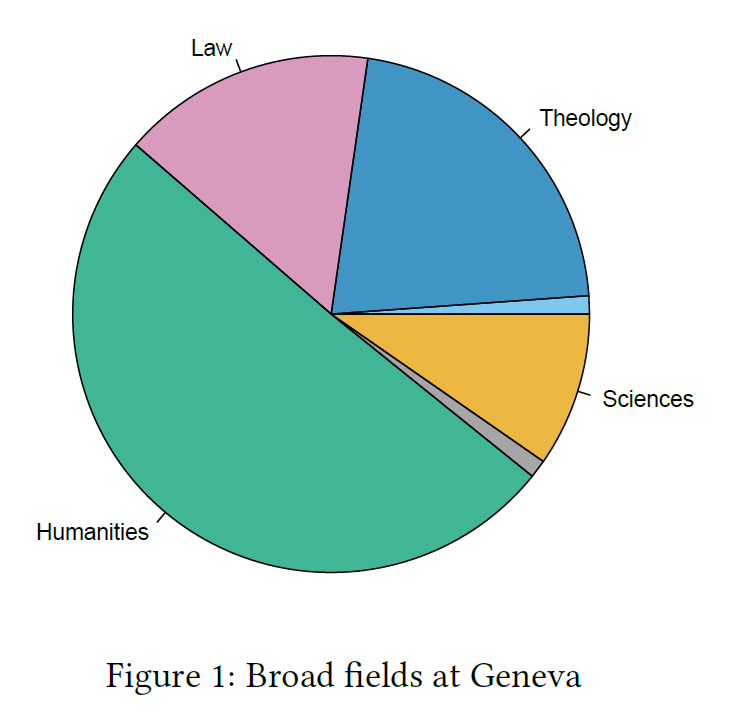 Figure 2 is a plot of the places of birth of all the scholars of Geneva, and shows the European character of this university. There are three distinct periods: during 1537–1617, many scholars came from France, which was subject to religious conflicts between Catholics and Protestants; after the Revocation of the Edict of Nantes in 1685 (forbidding the Protestant religion), several scholars came from the South of France; later on, from 1734 to 1800, foreign scholars came from Germany. 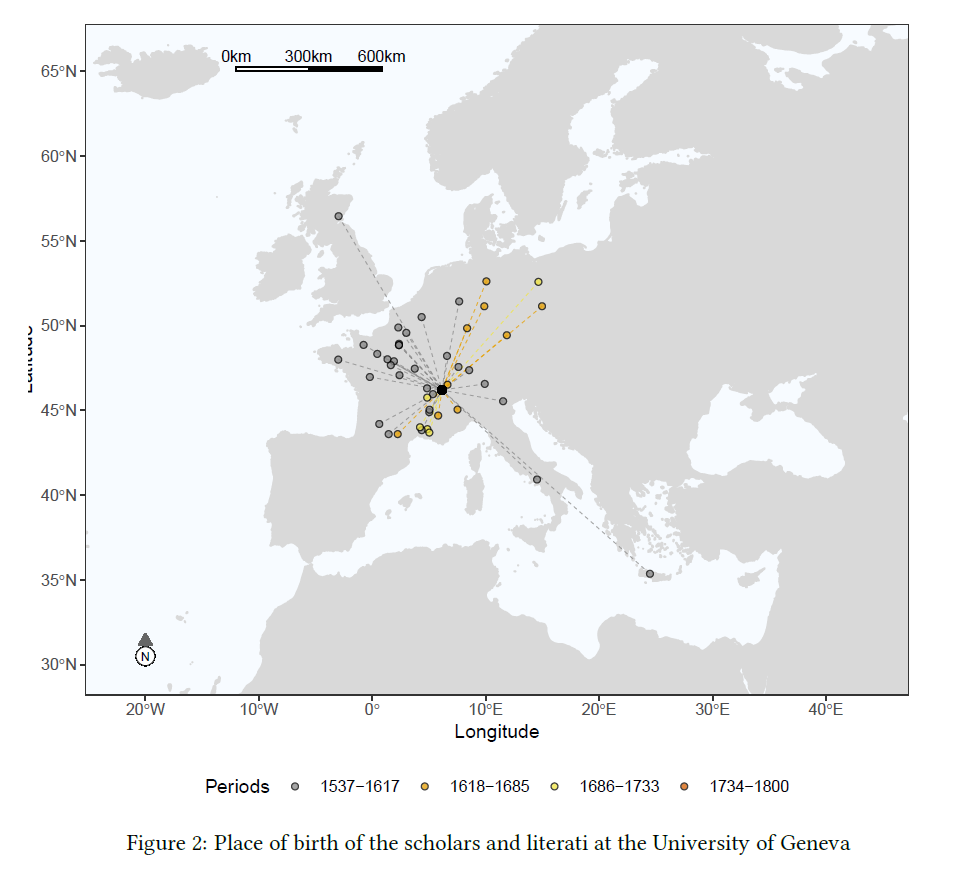 Human Capital of Scholars and Literati

For each person in the databasewe compute a heuristic human capital index, identified by combining information from Worldcat and Wikipedia using a principal component analysis. We also compute the notability of the university at each date by averaging the human capital of the scholars active in Geneva 25 years before that date. Details are given in Appendix. Figure 3 shows the names of all the scholars with a positive human capital index. The orange line plots the notability of the university. The vertical green lines (rug plot) show the distribution of all scholars, including the obscure ones, over time.

The university started strongly in the sixteenth century. Its top five scholars are all from that period. The initial notability of Geneva is not as high as one could imagine by seeing the quality of those scholars, because all of them also taught at other universities, which reduces their weight in computing the university notability index. Geneva maintained a competitive level thereafter with a wealth of publishing scholars. 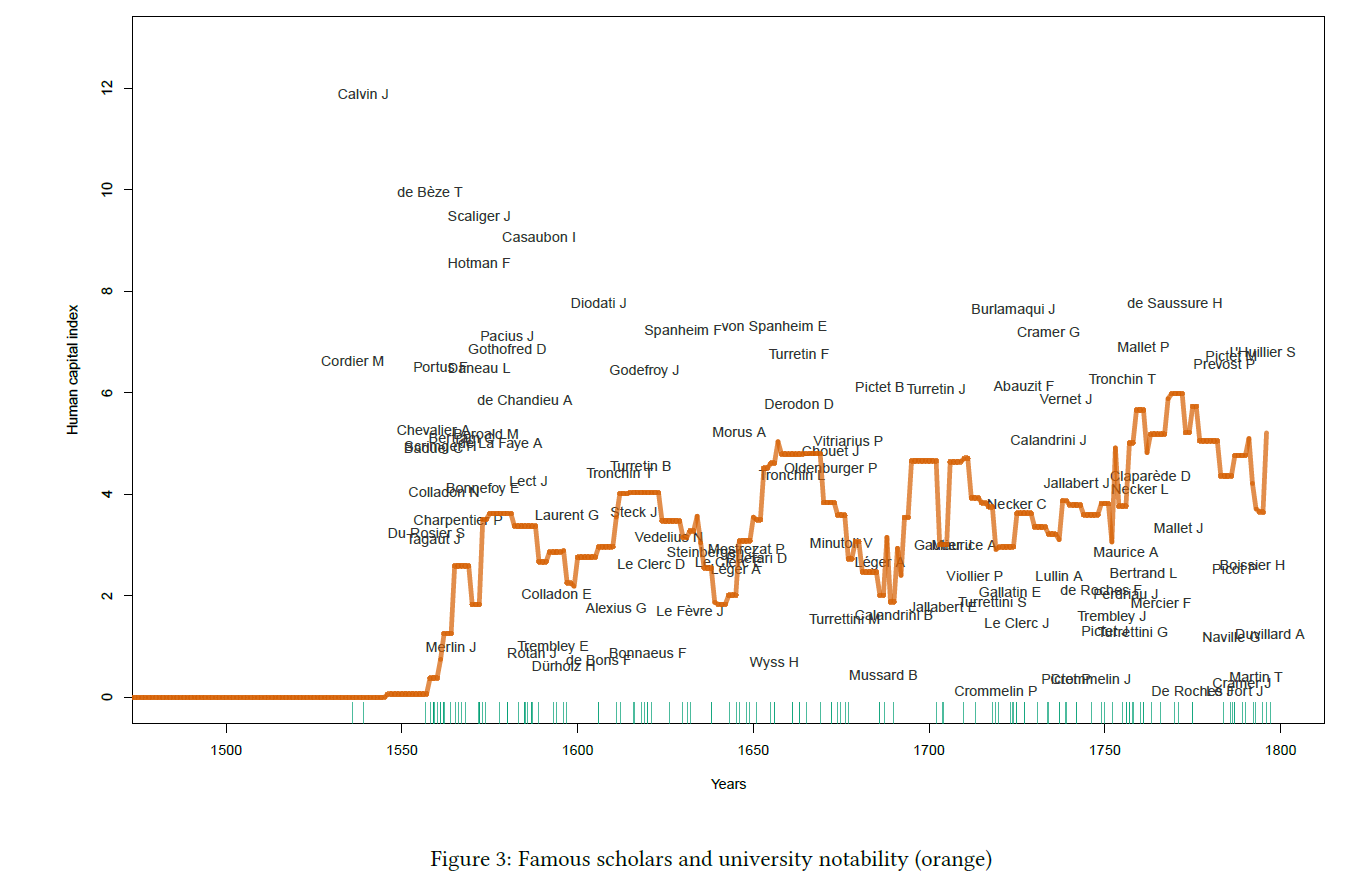 A brief overview of the five professors with the highest human capital index follows.

Johannes Calvin (Noyon 1509 – Geneva 1564) was a French theologian, pastor, and reformer who first taught theology in Strasbourg, after having been expelled from Geneva because of the triumph of the Libertines. Subsequently, he was recalled to Geneva and then launched the school reform project. It is therefore in this context that Jean Calvin founded the University of Geneva. He also contributed to the development of the system of Christian theology which would later be called Calvinism.

Théodore de Bèze (Vezelay 1519 – Geneva 1605) was the collaborator and the successor of Jean Calvin in his school reform project for the University of Geneva. Théodore came from a family of 7 children; he studied in Paris thanks to his uncle Nicolas de Bèze. He then became a Protestant theologian, humanist, Bible translator, teacher, ambassador, and poet. He taught in Lausanne before arriving in Geneva.

Josephus Justus Scaliger (Agen 1540 – Leiden 1609) was the tenth child and third son of Julius Caesar Scaliger. He first studied at the college of Guyenne in Bordeaux but, because of the bubonic plague, he returned to his father who taught him poetry. After his father’s death, he studied Greek, Hebrew, and Arabic which he taught at the universities of Valence, Geneva, and Leiden. He was visiting Switzerland when the Huguenots were massacred by the Catholic mob in France (1572), and was hired in Geneva, where he stayed for a short period of time (1572-4).

Isaac Casaubon (Geneva 1559 – London 1614) is one of the authors of the Geneva University Charter. After his father gave him his first Greek lessons, he arrived in Geneva at the age of 19 to continue his apprenticeship. He later became one of the holders of the Greek chair at the university. Later, he move to the Royal College in Paris (De la Croix 2021).

François Hotman (Paris 1524 – Basel 1590) was a French lawyer who taught at eight different universities. A convert to Calvinism, he was forced to move back and forth between France, Switzerland, and the Holy Roman Empire. Like his colleague Scaliger, he took refuge in Geneva after the massacre of 1572. In his famous work Francogallia, first published in Geneva, he promoted the merits of a representative government and an elective monarchy. He is also known for having put forward the idea of a national code of French laws.

Beyond those who taught at Geneva, other important individuals might be related to the university. They probably did not occupy an official position, but they were involved in teaching and/or research. Those scholars are counted to establish all figures, but Figure 3. One related scholar with the highest human capital index is featured below.

Giordano Bruno (Nola 1548 – Roma 1600) was a European university professor who mainly practiced in France, Italy, Germany, and Switzerland. His main fields of work were philosophy and cosmology. He stayed in 1579 in Geneva as an Italian refugee and he entered his name in the university rector’s book in May of the same year (Le Fort, Revilliod, and Edouard 1860). Returning audaciously to Italy afterwards, he was burned at the stake, having dared to prefer science to faith, to reject mass, to call the monks of his time "donkeys," and above all to fight Aristotle’s ideas (Dufour 1884).

One of the families most involved in university life is without a doubt the Turretins, also known as Turretinis. This family migrated from Lucca in the 16th century and was one of the aristocratic families that governed the Tuscan city. It was for this reason that Emperor Rudolf II recognized their nobility in 1583. Figure 4 shows a part of their genealogical tree (from https://www.geni.com), starting from Francesco who migrated from Lucca. A total of seven members of the family taught at Geneva. The most well-known ones are the theologians Benedict, Francis, and Jean-Alphonse. 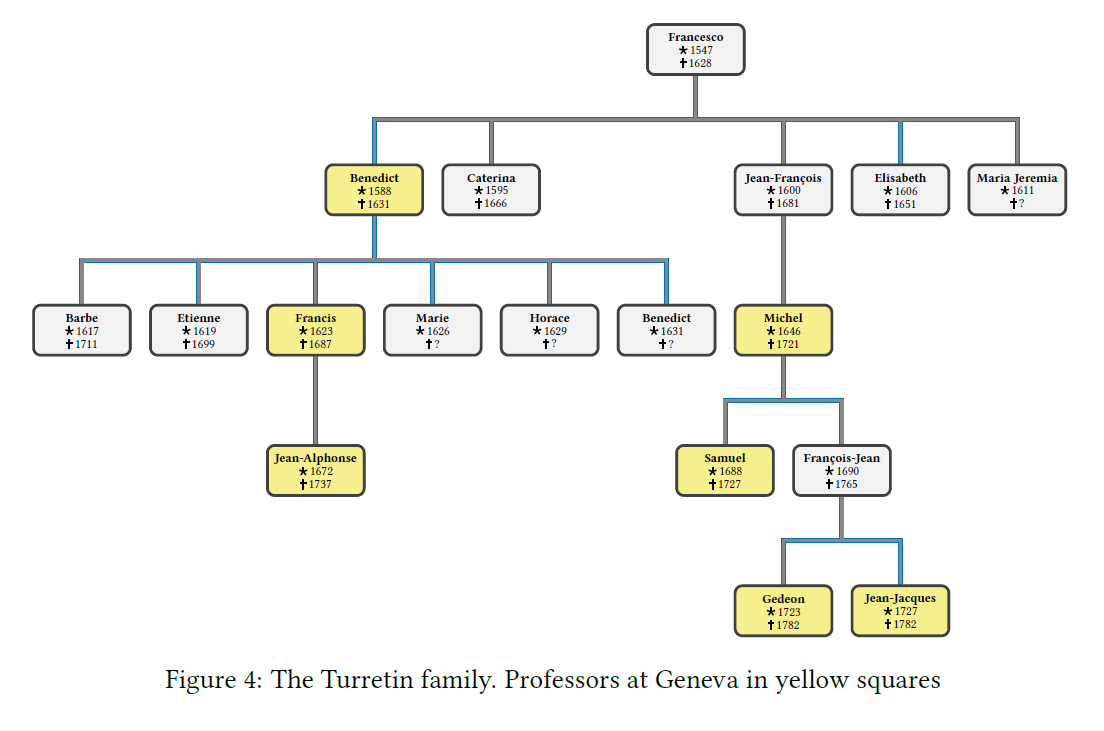 Intersections with Nearby Universities

Among the 144 Genevois scholars, 127 do not appear on university rolls at the nearby universities of Lausanne and Bern. Figure 5 shows these intersections between the universities. The relationships are stronger with the French speaking Lausanne than with the more Germanic Bern.