Scholars at the Royal Society of Sciences of Montpellier (1706–1793)

This note is a summary description of the set of scholars who worked at the Royal Society of Sciences of Montpellier from its inception in 1706 to its dissolution in 1793.

The middle of the seventeenth century saw the emergence in Montpellier of a group of citizens interested in the new sciences, influenced by students of René Descartes (Castelnau 1858). There were informal meetings, where new research was presented. The founders of the Royal Society of Sciences of Montpellier were three astronomers, who acted under the protection of the influential Giovanni Domenico Cassini (1625-1712) from the Royal Academy of Sciences in Paris. Next to ordinary members, there were some honorary members, chosen from among the top public managers of the region and the city, in order to facilitate the relations with the authorities. By 1793, the strong contributions to sciences made by the academicians over 87 years were not sufficient to compensate for its aristocratic way of life and its royal origin: the academy was dissolved by the Convention and its assets – garden, collections, cabinets, library – seized.

In his history of the society, Castelnau (1858) lists of its members at several points in time. Other lists are provided in a pdf document by the Académie des Sciences et Lettres de Montpellier (2017) and on the website by the Comité des travaux historiques et scientifiques (2019). A very useful book is by Desgenettes (1811), who collected all the funeral orations of the members. Information can be completed using the biographical dictionary of the county by Clerc (2006).

Table 1 shows some descriptive statistics. There are 88 scholars. The year of birth is known for a large majority of them. The mean age at nomination is 41.3 years. Longevity shows a large decrease from the first period (nominations bef. 1733) to the second one. Given the very low number of observations, the difference is however not statistically significant. This drop in mean longevity might have been the result of many aristocrats being killed during the French Revolution, but it does not appear to be the case. The birth place is known for 98.9% of the people. The median distance between birth and Montpellier is 0 km, meaning that more than half of the scholars come from the city. Finally, 39.8% of the scholars have a Wikipedia page (in some language), and 72.7% of them have left a footprint in the catalogues of the libraries of the world, Worldcat, either by having published some work, or by having been the subject of published books and articles. These are large numbers, attesting a high average quality of these persons. 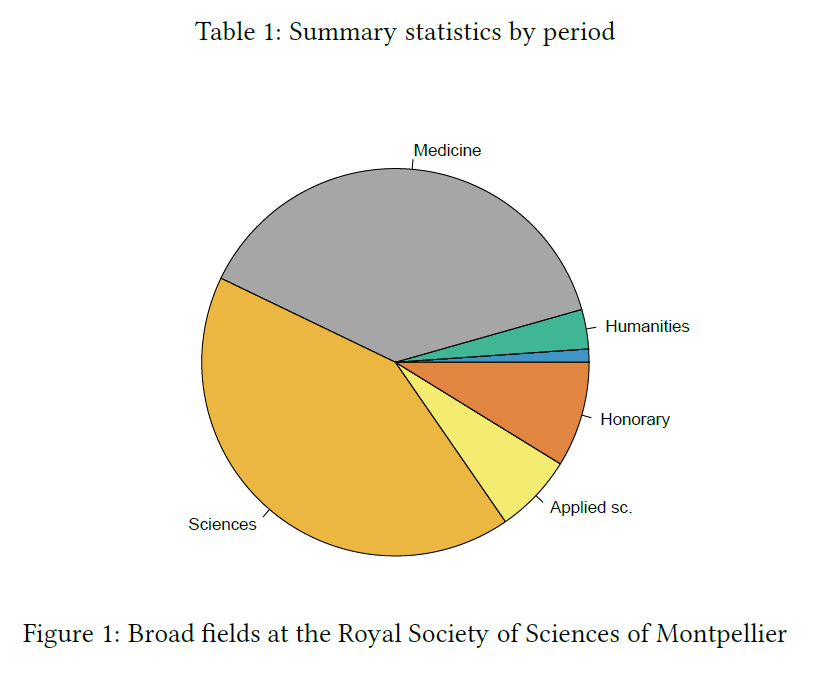 Figure 1 shows the relative importance of fields, broadly defined. The breakdown in terms of fields shows that this Society was mostly a scientific society with very few persons in arts and humanities. Compared to the other provincial academies in France during this period, this is a specificity of Montpellier (Roche 1978). The category “Honorary” captures the high profile persons who have been added to the society but do not have scientific merit to their name.

Figure 2 is a plot of the places of birth of all the scholars of the Royal Society of Sciences of Montpellier.Most members come from the South of France. The international character of this Academy is quite limited. 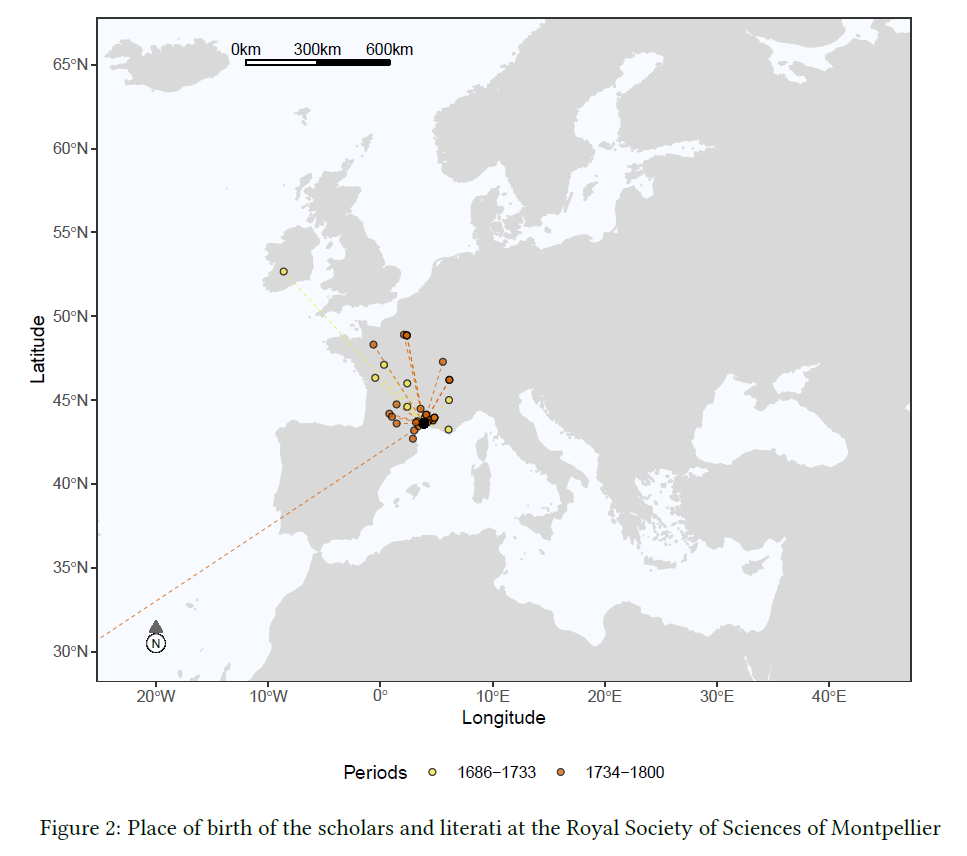 For each person in the databasewe compute a heuristic human capital index, identified by combining information from Worldcat and Wikipedia using a principal component analysis. Details are given in Appendix. Figure 3 shows the names of all the scholars with a positive human capital index. The vertical green lines (rug plot) show the distribution of all scholars, including the obscure ones, over time.

The pattern shows a solid and persistent core of active scholars in this society. 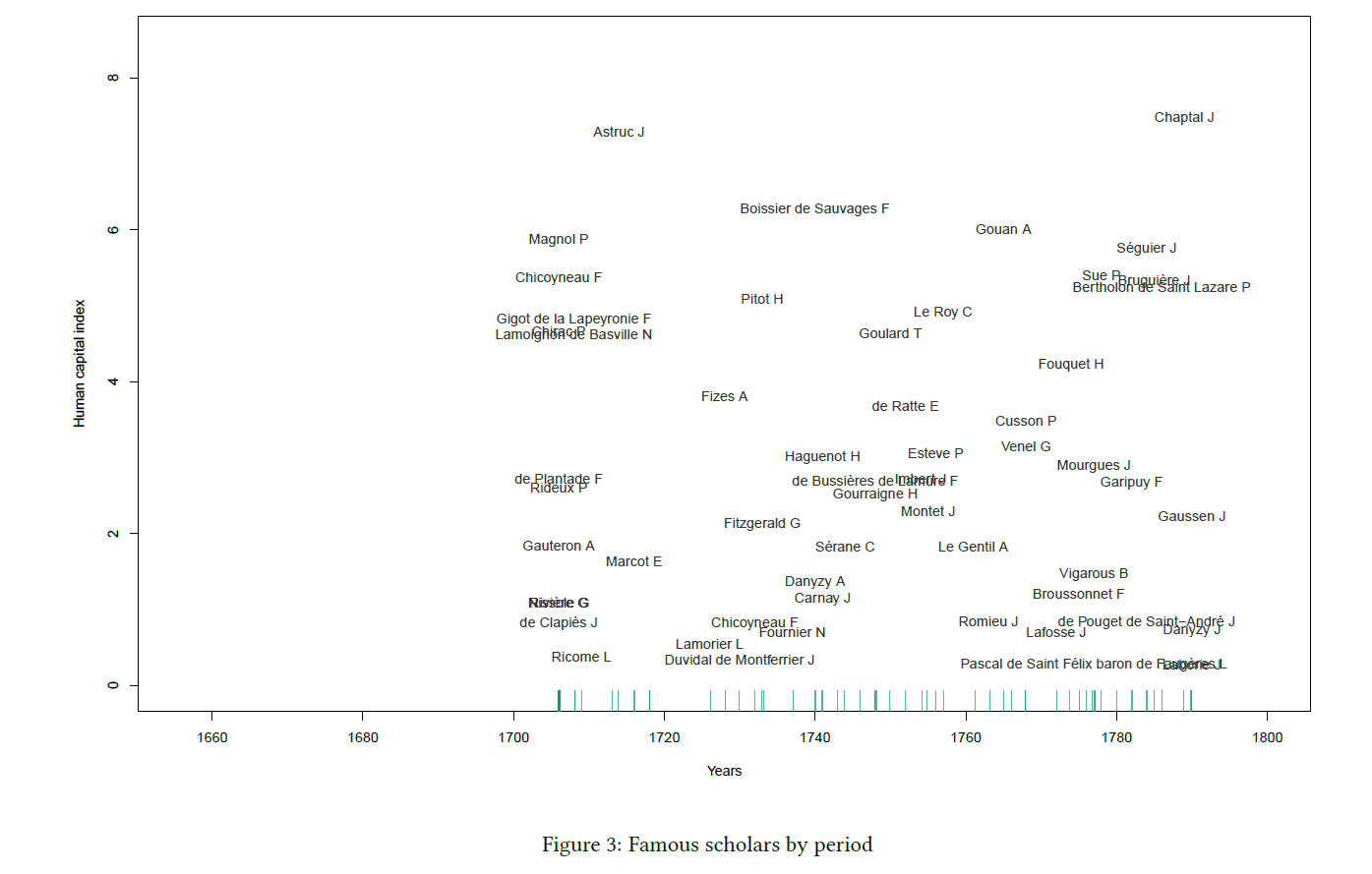 Jean-Antoine Chaptal (Nojaret (Lozère) 1756 – Paris 1832) was nominated at the Society of Montpellier in 1789 to a mathematics chair, but he was also known for being a physician and a chemist. He was a master of applied science, dedicated to using the discoveries of chemistry for the benefit of industry and agriculture. He is still remembered today thanks to his publication on the art of wine-making in France. His new procedure of adding sugar to increase the final alcohol content of wines came to be called “chaptalization.”

Jean Astruc (Sauve 1684 – Paris 1766) was a professor of medicine at the University of Toulouse, Montpellier and at the Royal College in Paris. At the Society of Montpellier, he obtained the chair of anatomy in 1706. He wrote the first great treatise on syphilis and venereal diseases. In addition, he played a fundamental part in the critical textual analysis of the Bible, suggesting that its first book, the Genesis, was not written by a single author, but was composed based on several traditions. This work was written anonymously, given the sensitivity of the issue in the South of France, after the revolt of the “Camisards.”

François Boissier de Sauvages de Lacroix (Alès 1706 – Montpellier 1767) was professor of physiology and botany at the University of Montpellier. He made important improvements to its botanical garden, which included the construction of its first greenhouse. At the Society, he was nominated to the chair of botany in 1740. We also find him listed as a member of the most prestigious European academies (Royal Swedish Academy of Sciences in 1747, at the Royal Society in 1749, and at the Leopoldina in 1754).

Antoine Gouan (Montpellier 1733 – Montpellier 1821) was a naturalist who published the first French botanical work that followed the binomial nomenclature of Linnaeus. Taxa with the specific epithet of gouanii commemorate his name, an example being Ranunculus gouanii, a rare buttercup from the Pyrenees. He occupied the third chair of botany from 1765 at the Society of Montpellier.

Pierre Magnol (Montpellier 1638 – Montpellier 1715). was a French botanist. In 1694, he became Professor of Botany and Director of the Royal Botanic Garden of Montpellier. Before obtaining this chair, Magnol was several times denied a position because of discrimination against the Calvinists. With the revocation of the Edict of Nantes in 1685, Magnol converted to Catholicism, which helped him in his career. He held seats at both the Royal Society of Sciences of Montpellier (1706) and the Royal Academy of Sciences in Paris (1709). He was the first to publish the concept of plant families as it is understood today, a natural classification according to which plants that have something in common can be grouped together.

Several other important individuals were associated with the Society, if not directly included in its ordinary membership. They probably did not occupy an ordinary position, but they were involved in teaching and/or research. Here, we show one related scholar with a high human capital index. Those scholars are counted to establish all figures but Figure 3.

Gabriel Cramer (Geneva 1704 – Bagnols-sur-Cèze 1752) was a professor of mathematics at the university of Geneva who became corresponding member of several European academies, including the Society of Montpellier. He is still very well known for the Cramer’s rule, giving an explicit formula for the solution of a system of linear equations with as many equations as unknowns, valid whenever the system has a unique solution.

Figure 4 shows a part of the genealogical tree of the Nissole family, and highlights those who taught (medicine) at the University and those who were members of the Royal Society. In the funeral oration of Pierre Nissole, it is said that he was the son of Jean, who had a very large family, but that this did not prevent him from caring about the education of his children (Desgenettes 1811). 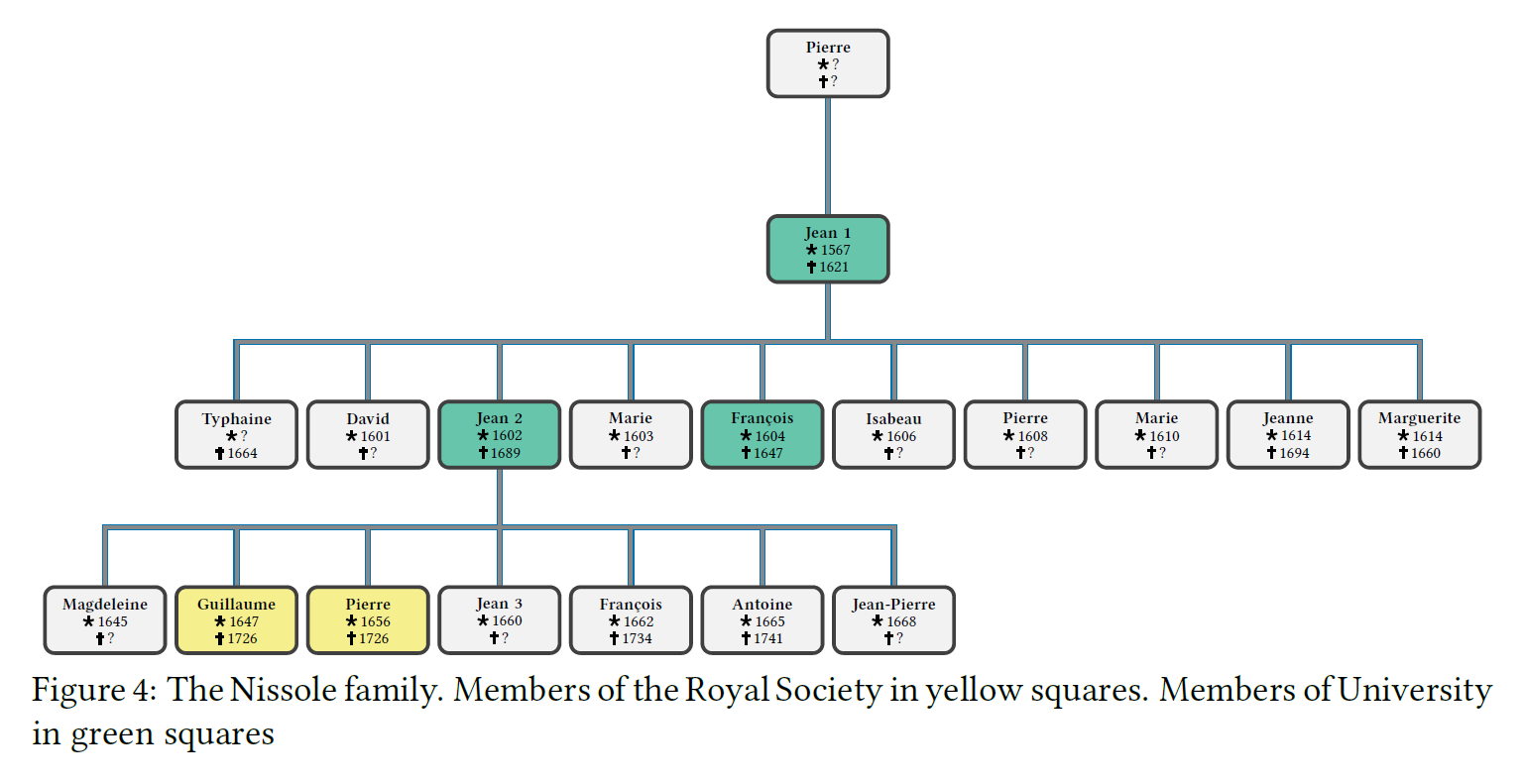 10 Intersection with Nearby Universities

Figure 5 shows that many members of the Royal Society of Sciences were also professors at the University. This is a unique pattern for France, in which academies were often unrelated to the local universities.

François de Plantade (1670-1741), a founding member of the Society, had climbed peaks such as the Canigou to take barometric readings. But his ascent, at age 70, of the Pic du Midi de Bigorre proved fatal. On August 25, he died negotiating the climb, sextant in his hand, exclaiming “Ah ! que tout ceci est beau” (Ah! how beautiful all this is.)

After finishing high school, François-Bourguignon de Bussières de Lamure (1717-1787) returned to his home town, at La Martinique (Antilles), where he collided violently with his father. The young man was planning to study medicine while the author of his days had other ambitions for him. In defiance of his father, the 19 year old, he embarked secretly in 1736 for Marseilles and thereafter travelled directly to Montpellier. (Dulieu 1968) He was then 19 years old! He entered the Royal Society of Montpellier in 1748.