This note is a summary description of the set of scholars and literati who taught at the University of Jena from its inception in 1558 to the eve of the Industrial Revolution (1800).

The University of Jena was founded at the initiative of the Duke of Saxony, after his defeat in the SchmalkaldicWar and consequently the loss of the university in Wittenberg (Hermans and Nelissen 2005). The Alma Mater Jenesis received its deed of foundation from the German imperator in August 1557. Teaching started one year later. From the beginning, the University of Jena had a sharp Lutheran character and was one of the most politically radical universities in Germany. At the turn of the 19th century, the University flourished and emerged as a center of German idealism and early Romanticism that attracted some of the most influential scholars of the time.

On the occasion of its 300th anniversary in 1858, Günther (1858) published a Festschrift on the University of Jena. The Festschrift is a compendium of brief biographies of all scholars by faculty, up to the year 1858. With almost 300 pages this comprehensive book serves as the main source. We were only able to add a marginal number of scholars who were missing in Günther (1858), from a variety of other sources.

Table 1 shows some descriptive statistics. There are 370 scholars and literati. The year of birth is known, sometimes approximatively, for 342 of them. The mean age at appointment is 32.9 years, and fluctuated quite a bit. Longevity did not improve over time and remained around 60 years, which is low compared to other universities. The birth place is known for 95% of the individuals. The median distance between birth and the Alma Mater Jenesis is 90 km, with less than 12% of scholars born in Jena. It does not display a time trend. Finally, 72% of the scholars have a Wikipedia page (in some language), and 91% of them have left a footprint in the catalogues of the libraries of the world, Worldcat, either by having published some work, or by having been the subject of published books and articles. Those two numbers are very high, a reflection of the fact that our sample is mostly built from the list of full professors in Günther (1858).

Figure 1 shows the relative importance of fields, broadly defined. The fields of knowledge reflect the four faculties of the full University of Jena: Theology, Medicine, Law and Humanities. Due to its humanistic importance towards the end of the 18th century, most of the scholars are linked to the faculty of Humanities. Even though no separate faculty of sciences existed over the period considered, we identified some mathematicians, physicists and so on as scholars linked to science. 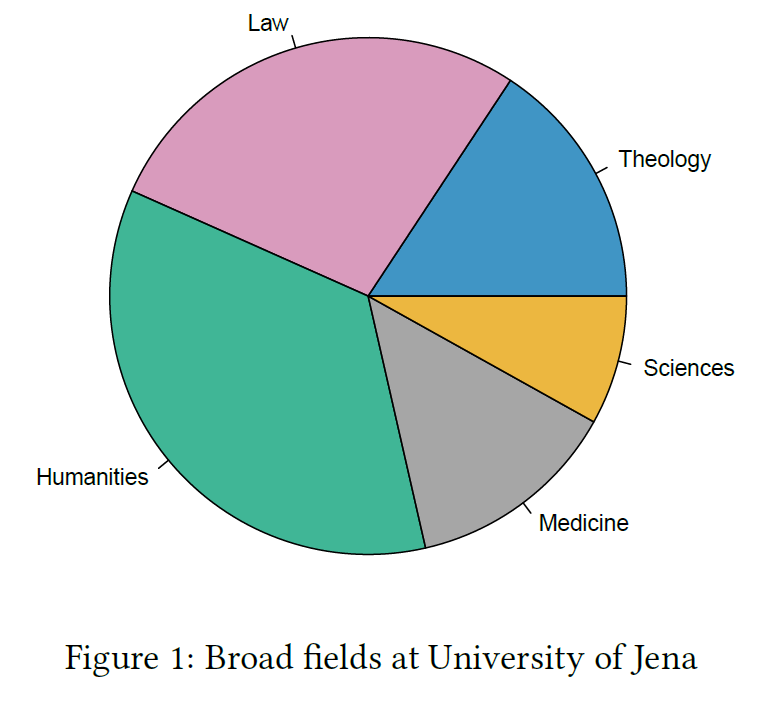 Figure 2 is a plot of the places of birth of all the scholars of Jena, and shows the Germanic character of this university. 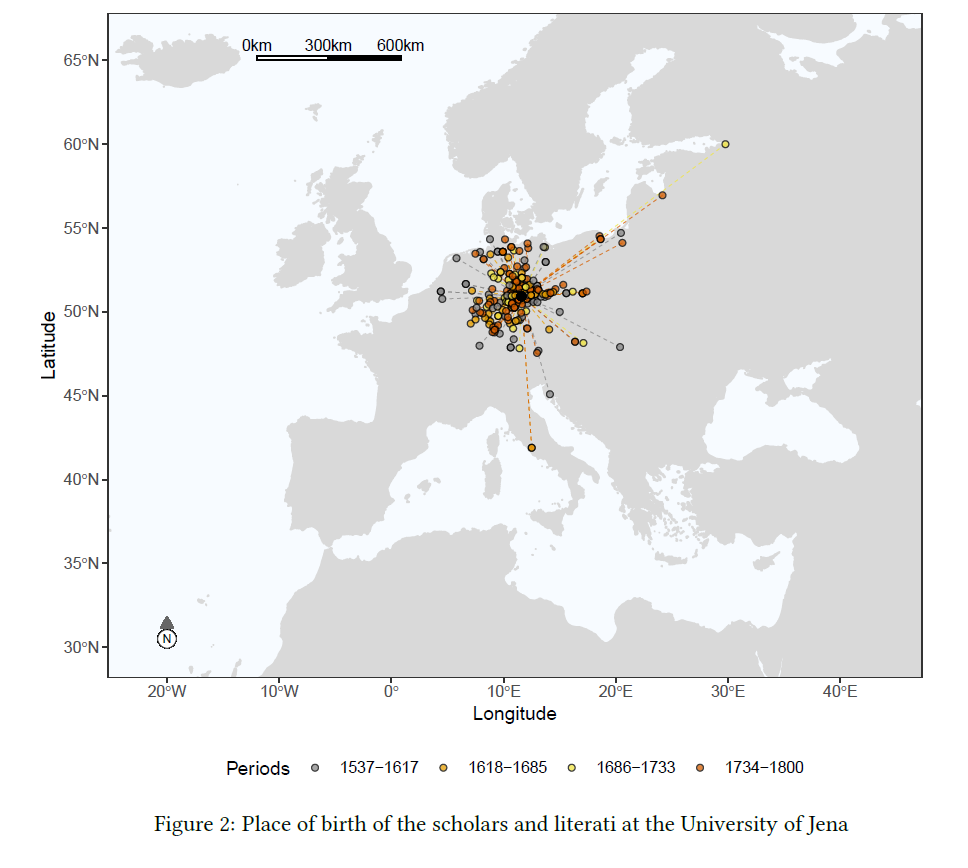 For each person in the databasewe compute a heuristic human capital index, identified by combining information from Worldcat and Wikipedia using a principal component analysis. We also compute the notability of the university at each date by averaging the human capital of the scholars active in Jena 25 years before that date. Details are given in Appendix. Figure 3 shows the names of all the scholars with a positive human capital index. The orange line plots the notability of the university. The vertical green lines (rug plot) show the distribution of all scholars, including the obscure ones.

Johann Christoph Friedrich von Schiller (Marbach (Neckar) 1759 –Weimar 1805), present-day eponym of the university, was a physician, philosopher and historian. He studied law and graduated in 1780 with a doctoral degree in medicine at Karl’s High School. After escaping military service, he focused on his passion: writing dramas, poets and ballads. Leaving an impressive life work, he is one of the most important German dramatists and poets. He started to teach at the faculty of Philosophy in 1789.

Johann Gottlieb Fichte (Rammenau 1762 – Berlin 1814) belongs to the most important thinkers in the philosophical movement of German idealism. New insights into the nature of consciousness as well as works on the Thesis-Antithesis-Synthesis are among his key contributions to epistemology. However, he is sometimes considered as one of the fathers of German nationalism and his writings include some anti-Semitic elements. In 1794 he obtained an academic position at the University of Jena, and, after 1800, at the universities of Erlangen and Berlin.

Friedrich Wilhelm Joseph von Schelling (Leonberg 1775 – Ragaz 1854), had a background in theology, philosophy, medicine and mathematics that enabled him to contribute to and renew natural philosophy. He also belonged to the main thinkers in the German idealism movement and bridged Kant’s and Hegel’s philosophies. He studied in Tübingen and Leipzig and entered the University of Jena in 1798. He left in 1803 to move to Würzburg and later moved to Munich and Berlin.

Justus Lipsius (Overijse 1547 – Louvain 1606) studied theology, law and humanities. The classical philologist and humanist created the intellectual movement of Neostoicism by reviving ancient stoicism in a way that aims to be compatible with Christianity. He switched between Catholicism and Protestantism back and forth and held academic positions in Louvain, Jena and Leiden. He had lively exchanges with his contemporaries, writing around 4000 letters. The building of the European Parliament in Brussels is named after him.

August Wilhelm von Schlegel (Hannover 1767 – Bonn 1845) shaped the Early German Romanticism. Studying theology and classical studies, he became a well-known translator and scholar of language and literature. After a first academic position in Jena, he travelled across Europe, giving lectures, e.g. in Berlin and Vienna, and was finally appointed as first professor of Indology at the newly established university in Bonn. His translations of Shakespeare’s writings are among his main contributions.

Beyond those who taught at Jena, several important individuals are related to the University. They probably did not occupy an official position, but they were involved in teaching and/or research. Those scholars are counted to establish all figures but Figure 3. Here, we present one exceptional person in that category.

Another way to measure the notability of individuals is to look for signs of recognition such as street names... and lunar crater names. The following three professors received this honor, in recognition of their contribution to the advancement of mathematics.

Michael Neander (Joachimsthal 1529 – Jena 1581) completed his studies in Wittenberg with a Baccalaureus in Philosophy in 1549 and a Magister in 1550. In 1550, he also received a doctoral degree in medicine from the University of Jena. He was appointed as professor of mathematics and Greek one year later. In 1560, he also became professor of medicine. Only a few of his rather limited number of manuscripts have survived.

Johann Andreas von Segner (Preßburg 1704 – Halle 1777) studied physics and mathematics in Jena from 1725 to 30. Before his appointment as assistant professor of mathematics in 1732, he was active as a physician in Preßburg. In 1733, the University of Jena promoted him to full professor. However, in 1735 he moved to Göttingen. From 1755 until his death, he was a professor in Halle. Segner significantly contributed to the development of turbines. The Segner turbine was named after him.

Erhard Weigel (Weiden an der Nab 1625 – Jena 1699) was an astronomer, mathematician, philosopher, and inventor. He was supported by thewell-known astronomer Bartholomäus Schimpfer who taught him mathematics. As soon as he received the Magister in Philosophy in Leipzig, he started lecturing university students in mathematics. In 1653, he was appointed as a professor of mathematics in Jena and was well-known for his inspiring lectures. Samuel von Pufendorf and Gottfried Wilhelm Leibniz featured among his students.

We counted 30 father-son pairs among the professors at the University of Jena. Figure 4 gives one example of a family, the von Schröter family. The genealogy tree is probably incomplete. We have highlighted those who taught at Jena. The three most ancient taught medicine, while their descendants taught law. All of them have published well.

The University of Jena was very proud to count among its early modern professors Anton Wilhlem Amo (Axim (Ghana) 1703 – Shama (Ghana) 1753), who was of African origin. His case, together with two other “black” scholars, is described in more detail in De la Croix (2021).

Here we assume that when a professor occupied a position in more than one university over his/her life, this established a link between those universities. The universities with which Jena is linked are displayed in Figure 5. The long distance links seem to shrink over time, except those with the Imperial university of Moscow.

Georg Ernst Stahl (Ansbach 1660 – Berlin 1734). From 1679 he was a student of medicine and chemistry in Jena. In 1684 he also did his PhD there. Applebaum (2003) claims he then lectured in chemistry there. After his ph.D he made his habilitation and pursued his academic career at the University of Halle. He iswell known for having contributed to chemistry and to medicine, defending new viewpoints in these two fields (phlogiston theory and vitalism).

Johann Friedrich von Schiller, by far the most famous scholar and professor with the highest rank in our Human Capital Index, was appointed to extraordinary professor in 1789 at the intercession of Johann Wolfgang von Göthe. According to the Neue Deutsche Biographie, however, his engagement at the university did not last long as Schiller did not enjoy academic teaching much.

In 1558 the newly established University of Jena appointed Paul Luther, the third and last son of Dr. Martin Luther, as professor of medicine. The enthusiastic defender of his father’s ideas, had objections to the theology of Victorinus Strigel, and left the university soon after to become the personal physician of John Frederick II, Duke of Saxony (Morris 1858). 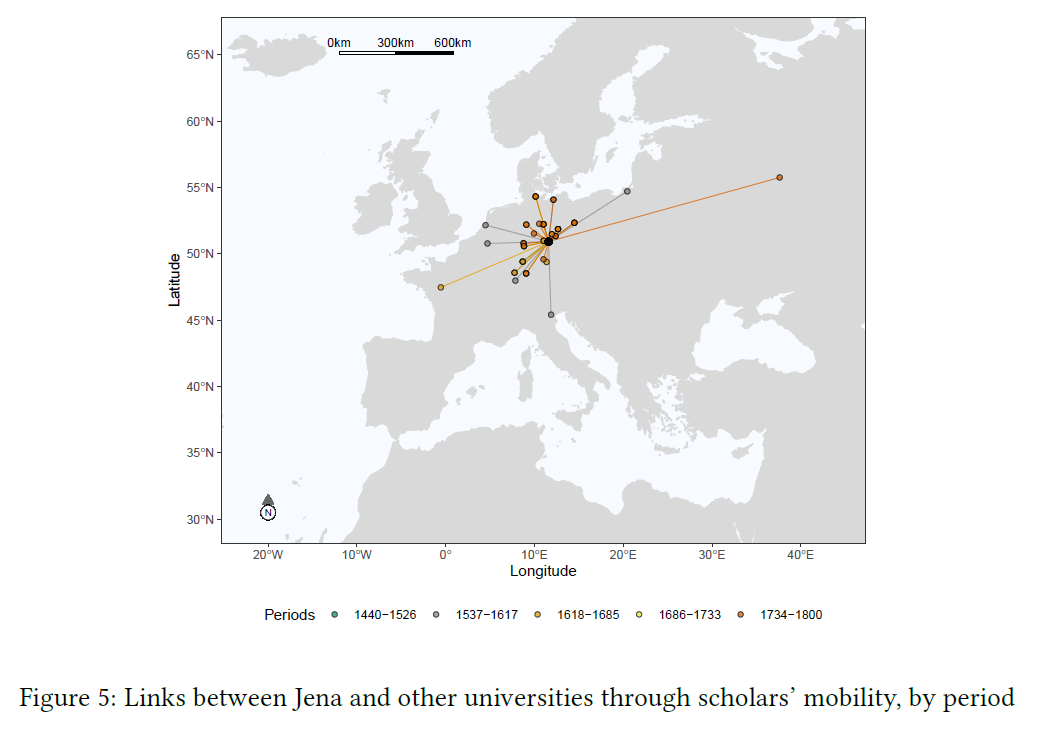 Hermans, Jos MM, and Marc Nelissen. 2005. Charters of foundation and early documents of the universities of the Coimbra Group. Leuven: Leuven University Press.